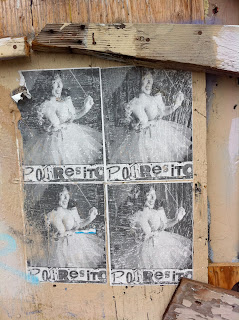 Several months ago, I was living in the Mission. Along my walk to work, I spotted a poster of a woman in a fairy godmother outfit. She looked something like Lily Tomlin, but not.

Pobrecito, I thought. Shouldn't it be pobrecita? And why was she a poor thing?

The image got under my skin in a strange way. I'd be feeling sorry for myself, obsessing over the cataclysmic changes I was making in my life, and then I'd walk by the poster.

When I scraped my knee as a kid, my mom would kiss it better. "Oh, le pauvre," she'd say, a gentle reminder that it wasn't so bad as all that.

Eventually, I moved downtown. I take a different route to work now, coming from the opposite direction. One morning, I see another pobrecito poster.

This time, it's Catwoman. 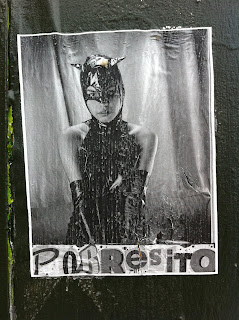 Or, someone in a Catwoman costume. Why the masculine form of the word?

Are they cross-dressers? Transgender? Or is the "poor thing" the person looking at them?

Is pobrecito a band, maybe? Or a poster artist? Is this his body of work?

Pobrecito follows me into work, sneaks in on me during the day.

It's entirely possible the answer is something depressingly ordinary. In a sense, I don't want to know. The mystery sustains me, in a quiet way.


Thursday, walking home from work, I see a new one. 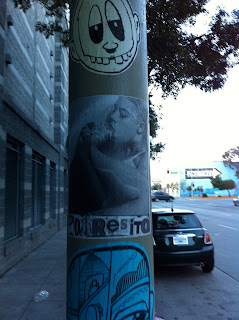 I don't even know what's happening in this picture. Is she sucking on her toes?

Pobrecito, I think, as the homeless guy cheerily greets me. I tell him I don't have any cash today.

Pobrecito, I think. Pobrecito.
Posted by Chemical Billy at 9:36 PM 2 comments: Links to this post

When I turned in my lease application, the building manager said, "I hope you don't mind my asking, but why are you moving here?"

Here is where I can look out my window onto the alley below. If I lean out far enough, I can see transactions of all sorts in the doorways. I climb a ladder to get into bed, and I leave my apartment and walk through the hallway to use the shared bathrooms. I learned today that Stephen Elliott lives in a building much like this, but his sounds like it is larger, and doubtless hipper.

When I tell people about my building, about the shared bathrooms, they say it sounds like a dorm. Stephen Elliott made the same comparison. I've never lived in a dorm, but I don't think that's quite it. There's no communal hubbub, no running feet, no towel-snapping. People try not to run into each other.

Someone did leave a Spinoza paperback in there last week, though, so maybe it is like a dorm.

Here's what it is like:
I get up to pee in the middle of the night, fuzzily stepping into my slippers and walking down the bright hallway with my eyes slitted. From the bathroom, I hear loud voices. Unforgivably loud, for this time of night, or morning. When I leave the bathroom, the hall is blocked with a forest of cops. My neighbor, skinny and shirtless, says: "...keep it down, please?"

The neighbor swings his bony arm in my direction, "So we don't disturb the neighbors."

I have to ask a cop if I can pass so I can get back to my room, my bed. Another cop, in a quieter voice, tells my neighbor he has to leave, now. He asks if he can get his stuff first. Put on a shirt.

The neighbors' open door faces mine, and I can hear the girlfriend talking to the cops inside. Pieces of things, tiny shards, are lying on the floor in the doorway.

Today I meet the little girl staying in the apartment on the other side of mine, the one with the Santa Claus on the door. She asks my name and tells me many things about her mom's boyfriend's kids, but she doesn't let her own name slip. I ask, but she prefers to tell me a complicated story about a brother and a sister who both, apparently, have my name.

The neighbor at the end of the hall invites me in to meet his cat. His Wanted poster is taped to the wall. I look closely at the photo. It's him, younger and with different hair. He points out the window. "You see those lights?" he says, "That's the city jail. I used to live there. Now I live here, and look out the window every day."

There's a whole universe behind every door in this place, galaxies of people and their lives and the people they know, ever-widening circles that overlap and extend into infinity.

Today I think, there's no place I'd rather be.
Posted by Chemical Billy at 10:25 PM 3 comments: Links to this post