Remember that place with those people that one time?

I'm not sure which way the ballet studio was. I danced there almost every day for ten years, you'd think I'd know, but so much has changed. Buildings torn down, new ones in their place, there are some things Americans aren't sentimental about.

Across the street is a gap where a building was recently demolished. My mind skims over the space. Maybe it was in the next block? I cross the street to look more closely as I pass. The one with the boarded-over windows? 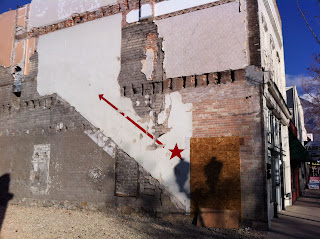 It's only when I'm almost on top of it, when I see the red star with the arrow pointing up, that my brain admits it. That's where the stairs were. I trudged up them a thousand thousand times, my flight bag with rolled pink tights and black leotard. I don't remember, then remember the red star.

Memory slips out of my hands like a fish. I lean toward people over a certain age. Do I know you? I want to ask.

In my last post I wrote about my dad speaking his name and birthdate to enter the gallery, but this is a borrowed memory. My sister remembered it when we went to the gallery together. When she described it, it came to life in my head, but could it have come alive even if it wasn't true? A family story told and retold and shaped and rounded until it becomes the story of the story, the moment itself long lost.

I walk through my old neighborhood, down the steep slope of Apple Avenue, winding through the tree streets: Locust Lane, Ash Avenue, Cherry Lane. There the J's house, they had a zipline in the back garden and a parlor where you couldn't bring food. There R's house, who I broke up with because of his body odor, which maybe wasn't bad but set off bad chemical alarms in my head. There the house that stood empty, where B and I made out before he crashed his motorcycle and died. Was it the house? Or was it the one a block over, with the new siding and the melting snowman?

My brothers used to make fun of me for saying, I remember! to stories that took place before I was born. But I remembered the story, the Super 8 movie clip, they way we told each other the story so often that I could see it as though I'd been there, the ghost of me, dragging the memory forward through time.

I have tea with a childhood friend, and this isn't something I can forget, the ease we have with each other, the connection, still strong, somehow still strong, though we grew apart in elementary school. We grew apart, is what I always said. We grew apart, even though he lived across the street. I say it to him now: We grew apart, when I went to France, and he looks at me. No, he says. That wasn't what happened at all. He tells me my parents thought I was spending too much time with boys, I didn't have enough friends that were girls.

And my world shifts. The story I'd told myself was different, it changes now, edges toward tragic, answering the ache in my heart whenever I remembered my friend.
Posted by Chemical Billy at 11:31 PM 2 comments: Links to this post

G sits beside me in the gallery. There's something about her presence that quiets my mind. My dad used to be the director of this gallery, thirty-five years ago. He would speak his name and birthdate into a microphone to gain access. I'd sit on a chair in the inner office, kicking my heels against the chair legs. Dad's colleague, Mr. Burnside, would slip his hand into mine, take me downstairs to the ice cream machine, buy me an ice cream sandwich. Mr. Burnside was impossibly old. He knew how to listen to a little girl. I'd eat the ice cream sandwich and chat with Mr. Burnside, kick at the chair legs while Dad worked, the gallery dark and empty on the other side of the wall.

G sits beside me now, while her husband R climbs a ladder to tweak the sound levels. It's a sound installation, a dozen little speakers suspended from the ceiling like faces. My voice comes from one of the speakers. R interviewed me over the phone a few months back about my decision to change my name. I don't remember what I said - I was just talking - but it's been captured and preserved. G has spent hours and hours listening to my voice, choosing which bits to save. I like the distortion from the telephone, except when I laugh. It sounds like a cackle.

It's a strange, intimate feeling. I am aware of G's silent recognition of a cadence in my voice. Like she has been brushing and braiding my hair while I sleep.

Later, at dinner, I say "ooh." G and R laugh. "You said it just that way in the interview!" A response that didn't make the final cut. We're eating homemade soup and salad. Dessert is a canvas bag of citrus from friends in Southern California. G puts her head in the bag to breathe it in, passes the bag to me. I gulp down a greedy breath. It smells like Santa Barbara, like the house of a long-gone friend who lived in the middle of a citrus orchard. R rolls a juice-heavy orange in his hand, "Such stiff little oranges," he says. I peel a grapefruit, clumsily, the oil from the skin running down my arm. "Sweaty grapefruit," says G. R peels his in a long spiral. He squeezes a piece of skin into the candle, and it sparks, a dinnertable firecracker.

G did, once, brush and braid my hair. She made a hundred tiny braids. I was in a play and the braids made it easy to tuck my hair under the wig every night. We spent hours with her hands in my hair. I sat at her feet while she braided and we talked.

We sit around the little table in their white-walled kitchen, eating sweet sections of grapefruit, the candles burning down. There is, I think, nothing better than this.
Posted by Chemical Billy at 12:22 PM 1 comment: Links to this post