He swiped the towel over her mouth a little too abruptly, lines appearing briefly between her eyebrows, then gone, her eyes dull as buttons.

"Sorry, Honey," moving the towel more gently now, efficient as a nurse, as a professional caregiver. One who gives care, as opposed to one who simply cares.

She was an Amazon, once. A head taller than any other woman, and most of the men. Queen of the campus, students lining up outside her office like acolytes, her smile calming them, opening up pathways into their brains the way she'd opened him, until he felt the sun shining straight into his cerebral cortex, like a piece of skull missing, his brain vulnerable to any passing breeze.

Her hands lay empty on the bedspread, eyes closing, already sinking back into sleep.

She was rounded and full once, her hips rising under his hand, heat coming off her like a promise. The way she laughed with her whole face, those rich lips open, eyes screwed tight as flowers.

Her wrists are skinny now, light as matches. He traces her outline with two fingers, not touching, then straightens up. She needs her sleep, the laundry needs doing, the dishes washed, her next dose ready.

She said she was a real Amazon after surgery, the two of them touching the flattened space, the scar after it healed. She laughed and pushed her belly against his hand, kissing him hard and laughing.

He's almost to the door and feels a tickle at the back of his neck. He turns to see her looking at him, her mouth almost smiling. It's been days since she's spoken. He drops the laundry, and crouches down beside the bed, his head level with hers.

Her eyes seem fully conscious, looking at him. He hasn't been lover for a long time now. Not partner, either. He can stand up and walk away, play basketball, eat pizza. Make plans for the summer.

No, he's something else, something they share only with each other, more intimate than love. A connection runs between them, deep and wide as their bodies and the souls that hover near, and he wonders if he will see the moment when hers pulls loose, trailing its silver thread, its umbilical cord, pulling free of the womb of this world.

With apologies and love to John and Lynn; to Geo and her Gram.
Posted by Chemical Billy at 8:01 PM 2 comments: Links to this post 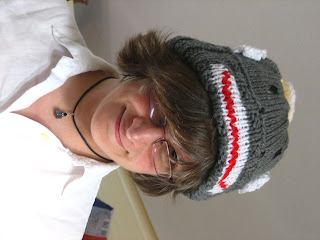 A dear friend knitted monkey hats for the Billy family. 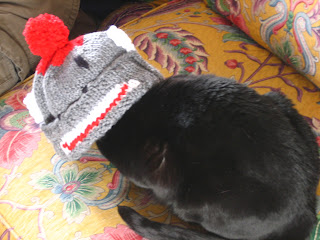 Blanche the cat models Mr. Billy's. Mr. Billy is camera shy, so Blanche is filling in.

What could be better than monkey hats?
Posted by Chemical Billy at 9:00 PM 5 comments: Links to this post

I share the bus with him most mornings. Had him pegged as a post-hippie: skinny, jeans-wearing ponytailed sort.

But on Friday, he climbed onto the bus, head ducking shyly. His hair was loose, brushed softly to his shoulders. His jeans, I noticed, were designer, fitting just so to his hips. A scarf ran through the belt loops. Hand lifting delicately to his sunglasses (glamorous Jackie O), I saw his fingernails shone, freshly manicured.

He pulled off his sunglasses, his eyes flicking from person to person around the bus. I smiled at him; he returned the smile, looking demurely down, mascaraed lashes casting shadows on his pinking cheeks.
Posted by Chemical Billy at 10:39 AM 2 comments: Links to this post

Reasonably, my colleagues view the #22 bus with suspicion. It is noisy, crowded, smelly. Its route is through some of the worst sections of town.

I've ridden it in the middle of the workday when I'm leaving the office early, sick. When the riders are the gray-faced strung out; the bemused elderly; the leftover hippies, eyes following invisible spirits, hallucinatory bubbles as they rise toward the ceiling.

Early afternoon, and I'm elbowed by school kids shouting lusty from one end to the other, teeth sparking white in their greed to bite off chunks of life whole, to show us old folks their strength, their primacy. Weary-eyed teachers quiet near the front, an authoritative look from one momentarily lulls the kids.

But in the evening, oh, what a grand parade. In just a few blocks, on just one evening, I am treated to:

One cop near the front of the bus, bald as a lightbulb, talking with an elderly woman. I think she is Eastern European, possibly Baltic.

Two emaciated women, holding each other up. One white, one black. I cannot tell how old they are. They could be in their twenties or their forties, but the years have worked on them like the jaws of an animal. The white woman wears skinny jeans that nonetheless sag, fuscia thong showing above; the black woman a red leather skirt that outlines her curveless ass. Their eyes roll vaguely; I don't think they even see the cop as they sit directly across from him.

Two lushly built black women sit together. The larger woman's jeans are laced up the side with ribbon; flawless brown flesh shining out between the laces. Over one bubbling breast is tattooed "PRINCESS". I can't read her other tattoos. The two of them are trying to offer a seat to an elderly Filipina, who shakes her bobbed hair merrily, "No, no, I'm okay." A passenger gets off, leaving the seat beside Princess empty, and the Filipina sits at last. Her eyes widen as she takes in Princess' body art.

"Oh," she says, delicately touching one tiny finger to Princess' shoulder, "You have pictures?"

"Oooooh," says Filipina, her eyes worried as she looks up at Princess, "It not hurt?"

Back in the saddle

So to speak. I have a loaner laptop glowing reassuringly at me now. More bloggy goodness to come.
Posted by Chemical Billy at 7:01 PM 3 comments: Links to this post