To my charming, attractive and terrifyingly intelligent readers: my laptop is bollixed, screwed, mangled and nearly ashcanned. Normally, this would only be an inconvenience, as Mr. Billy is generous enough to share his with me; but as Fate likes to have a laugh now & then, Mr. Billy's laptop is similarly kaput.

So, my digital umbilical severed, I have to cadge lunch-hour time on the day job computer to let you all know this: I haven't forgotten you.
Posted by Chemical Billy at 3:05 PM 2 comments: Links to this post

The bus is late. I've been standing here for twenty minutes, while the bus stop fills up with people. A woman with a cane found a transfer on the sidewalk, still good for another hour. There are no takers; we all have passes.

Taxis troll by. One slows as it passes, the driver looking hard at me. I shake my head. Do I look like I want a taxi?

Still no bus. The moon is hanging just over the Walgreen's across the street, looking like a bright piece of candy. I'd like to reach up and pop it into my mouth, moonlight dribbling down my chin.

The taxi from before comes around again, stopping in the bus lane. The driver leans across the seat.

He's looking at me. Why me? I look around at the other people at the bus stop. Do I look like I can afford a taxi? I want to turn my pockets out to show how empty they are, but I don't have pockets.

"C'mon baby. I'll give you a discount of...twenty-five cents."

I have to laugh at that. He's getting into it.

He notices the woman standing next to me.

"Hey, I know you. I used to wash the windows in your neighborhood. Remember me?"

"Oh yeah," the woman's voice is deeper than his, like it's rising out of a tin pail of rocks, "I remember you. Didn' know you washed windows, though. I'm on disability now. Got a bus pass."

A couple comes out of the diner behind me.

"You're welcome to call me if you like," says the woman, "although it isn't a requirement."

She kisses his cheek, and walks away. Was it a date, or a job interview? Who the hell says it isn't a "requirement" to call?

The bus, finally. Two buses, one right behind the other. The one behind is empty, but I'm grooving on the people. I take the one in front.

I sit next to a woman covered with freckles, so deep and beautifully dense, it's like alien skin, like brocade, like a decorative tattoo. Her eyebrow is pierced.

In front sits a white man with a service dog at his feet, so blond he's almost albino. Beside him is a blue black man. The white man asks the black man if the dog bothers him. He says no.

The white man rocks in his seat, an extended nodding, constantly renewed assent. Beside him, his neighbor rocks in counterpoint. His movement is impatient; at any minute he'll rock himself onto his feet and off the bus. The blond man places one thumb on his knee, spreads his hand, measuring the distance from his own knee to the knee of his neighbor, his pinky hovering a naked millimeter above the other man's knee, until he can feel the electrons bouncing off the stranger's legs. He retracts his hand sharply.

Out the window, I see a poster for America's Next Top Model. A collection of arms, legs, breasts, blank faces. All these girls smashed and reshaped like playdough; I can't tell one from the other. Is this beautiful? I'd rather look at the people on the bus, the men rocking back and forth, the freckled woman next to me.

I think I'm in love with her. She's talking on the phone.

"Yeah, well I think she's still trying to deal with her mother's death, you know? She's seeing - she's Catholic, right? - so she's seeing this nun, like once a week, and this nun told her about a big cross in Burlingame. It's like this big cross, and you leave your problems at its foot, you know? So that's happening tonight, and I thought I'd go with her..."

Or the old woman across the aisle. Skin wrinkled and creased like a foil gum wrapper. High, proud crook to her nose. Well dressed. She could be a duchess, riding the bus. A button on her purse enjoins me to "Be Green."

My stop. I pull myself away from the freckled woman, the duchess, the rocking men. I wave at the bus driver, stepping off. The bus pullls away into the night, lit up inside like a rolling living room, like another person's life, warm and alive, glimpsed for a minute, then moving on.
Posted by Chemical Billy at 1:38 PM 7 comments: Links to this post 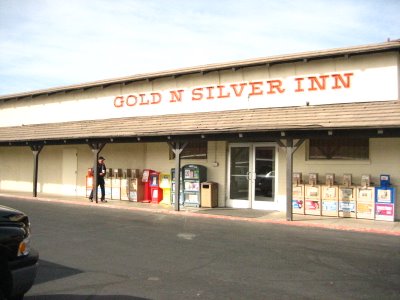 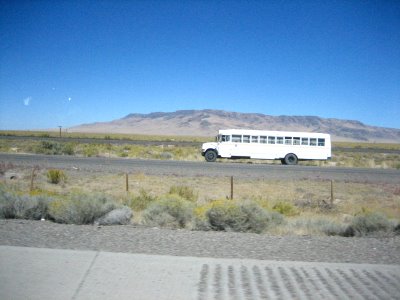 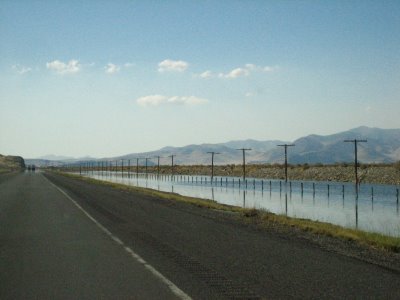 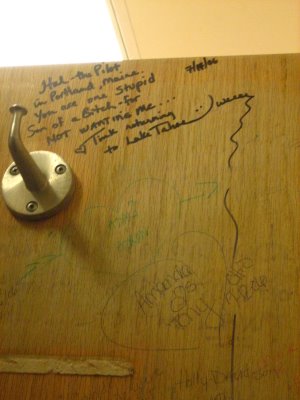 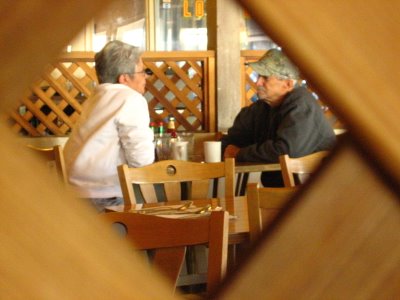 Basque breakfast at the Toki Ona Bar in Elko, NV.
Posted by Chemical Billy at 8:19 PM 5 comments: Links to this post